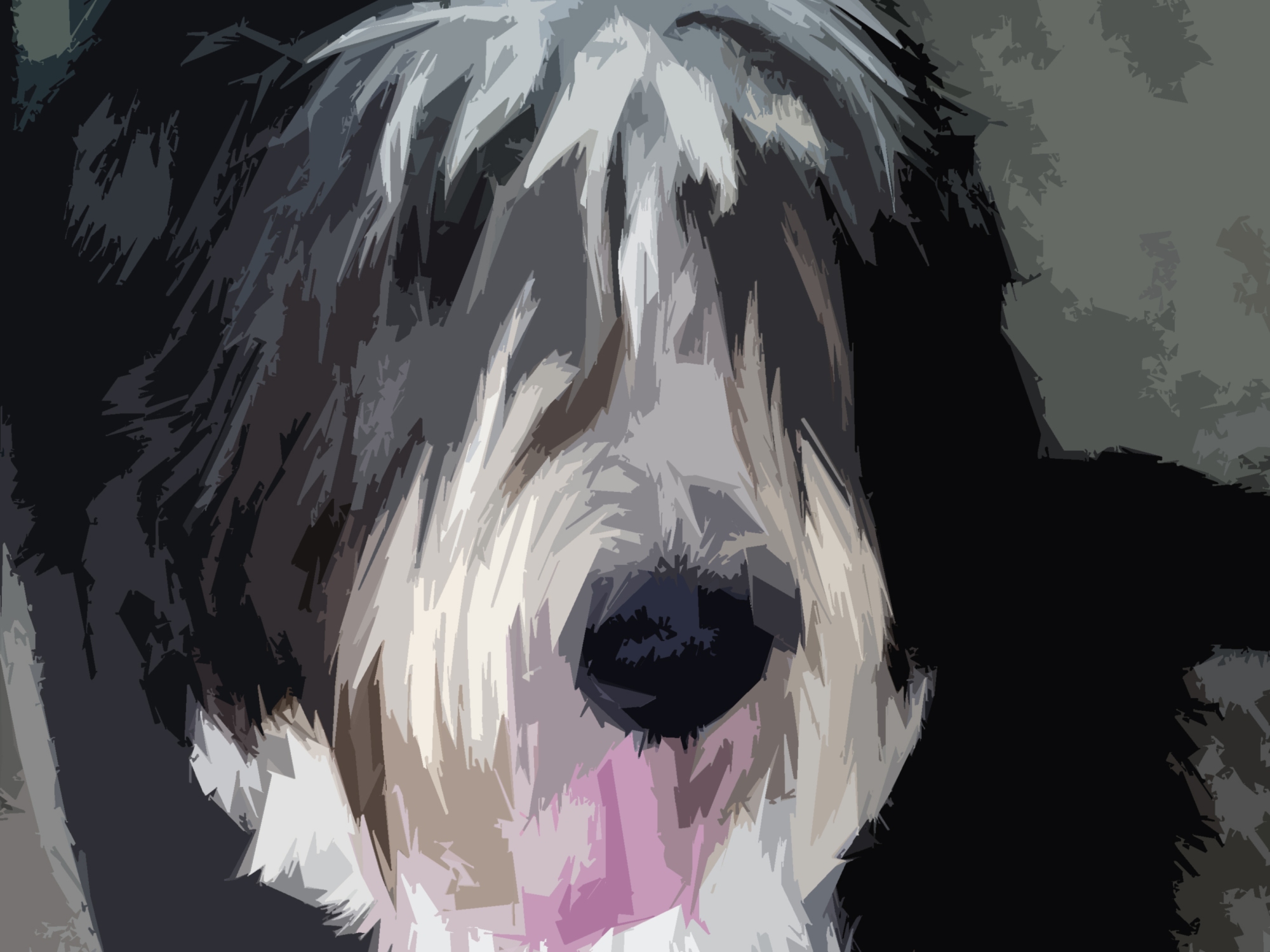 In the early light of Thursday morning, Nick dreamt of a typewriter. Brassy and antique, it was full of the kinds of words that just didn’t seem to live in the plastic sweatshop keys of his laptop. Dungarees. Mutton. Vamoose. He sat in front of it while phantom hands tapped away and slid the carriage back across the page at the end of each line. Charleston. Flapper. Hoosegow. The clicking of the keys was slow but persistent, until eventually it stopped abruptly. The machine barked twice.

The filthy sheepdog was inches from Nick’s face, staring patiently from behind the wall of white fur that fell over his eyes. His breath was heavy and hot on Nick’s skin, but not entirely unpleasant. The television was looping sports highlights; he’d been watching the Mariners lose when he fell asleep. His phone was wedged under the armrest of his couch; it showed three missed calls from Amy and was in need of a good charge. Seeing Nick stir, the dog resumed his pacing between the couch and the door to the backyard, his toenails clicking against the hard wood of the floor with each step. He had to piss; Nick could relate.

Nick swung his legs off the couch and searched blindly with his feet until they found their slippers. He rubbed his face and stretched his arms. The coffee table was covered in empty cans and the crusts of a Hawaiian Prime Supreme. A blank pad of legal paper was ringed with dried Coors. The animated clock above the SportsCenter logo told him he’d gotten a full eight hours, but the gravity he was fighting said otherwise. Eastern time, he thought, aggressively shaking the fog from his head. Murph’s low grumble beside the door forced him to his feet; he could handle a lot these days, but a urine stained floor was not one of them.

He opened the door and the dog sprinted into a corner of the yard and immediately began soaking the grass, shooting Nick a look of dumb gratitude and panting peace over his shoulder. The air was chilly, but the sun had been up for an hour and the world was beginning to warm from the ground up. Nick shuffled to the edge of the porch and began his own irrigation effort, splitting the gap between the top and middle rungs of the railing and soaking Amy’s flowers in barely-processed domestic beer. She’d planted them at the end of May, shoving each bulb into the dark soil with her thumb and making him promise to tend to them every other day while she was in Philadelphia; he wouldn’t count this as a watering. Across the lawn, Murph wrapped up and begin surveying the perimeter of the fence with his nose to the ground. The wet grass soaked the shaggy bottoms of his paws; twice he chuffed at invisible threats.

The dog barreled past him into the house, leaving a trail of wet prints and an earthy smell. Nick snagged his phone on the way to the kitchen and plugged it into the wall by the microwave. He was still fuzzy, and couldn’t remember if the cold coffee in the pot was a day old or more; he asked Murph, who was waiting by his bowl, but the dog had relatively little to say. He shrugged and flipped the warmer on. He scooped a brown anthill of greasy kibble into Murph’s bowl and an equally unappetizing mound of fiber cereal into his own.

On the counter, his phone rang and Amy’s picture flashed onto the screen. It was a photo she took herself the day after she got highlights in her hair; she looked good with some blonde, there was no denying it.

“Hello?” he answered in between bites.

It wasn’t a question.

“Where the hell have you been? I tried calling you a million times last night.”

He considered telling her the truth, be decided against it.

“Three times. You called three times. And I was out with the guys – beers and such”

Accuracy didn’t seem to be the point. Anger flexed in her voice, but she eased back into genuine concern. In the background, he heard traffic and a clatter of voices. She was at lunch.

“Have you written anything yet?” she asked.

“No, we just woke up. Having a bite to eat before I get after it.”

“Nick, is there somebody else there?”

“No,” he lied, again, “I just meant ‘we’ like the West Coast, you know? It’s breakfast time in Washington.”

Murph lifted his head out of his bowl and licked his chops. He had bits of kibble around his snout and a stream of drool connecting him to the bowl. Sensing impending danger, he came across the room and sat on Nick’s slippers, letting the hungover man pull absentmindedly at snarls in his fur.

“Dammit, Nick. Is he back? Did you let him in the house again?”

“I swear to God, Nick, if you let that creature in my house…”

What followed was a series of vague threats of bodily harm and romantic estrangement. He’d heard it before, but he enjoyed the variations she whipped up in the heat of battle. Murph had grown tired of the grooming and laid down on the cool linoleum of the kitchen; he would be asleep in minutes if Nick didn’t make any sudden moves.

“I don’t know why you insist on palling around with that filthy stray every time I leave for work.”

“Look at him right now and tell me that dog isn’t disgusting.”

Nick shifted in his chair and looked toward his feet. Murph had rolled onto his back and was twitching his feet in pursuit of imagined prey. His belly was streaked with mud and a stick was woven into the fur around the base of his throat.

“At least I don’t have a girlfriend on the side.”

She hung up, leaving him in the silence of the kitchen. He got to his feet and poured himself a cup of stale coffee. He drank half, then poured it down the sink; it had been far more than a day since he brewed the pot. On the floor, Murph had begun to snore. The sun had crested the trees in the yard, and there wasn’t a cloud in the sky. He wished he hadn’t made the joke; her trips were getting longer, and the tulips were already up to his knees. They’d be dead for the season before she returned.

“Want to go for a walk, Murph?” he asked aloud, waking the dog instantly.

He kicked out of his slippers and pulled on tennis shoes with no socks. Together, they shuffled to the garage, where he kept a collar and a leash stashed behind the paint cans under the workbench. As he strained to reach the contraband, his hand brushed plastic. Murph nosed forward under his arm. A bag of treats – maple bacon flavored – and a note.

Give the beast a bath. I love you.